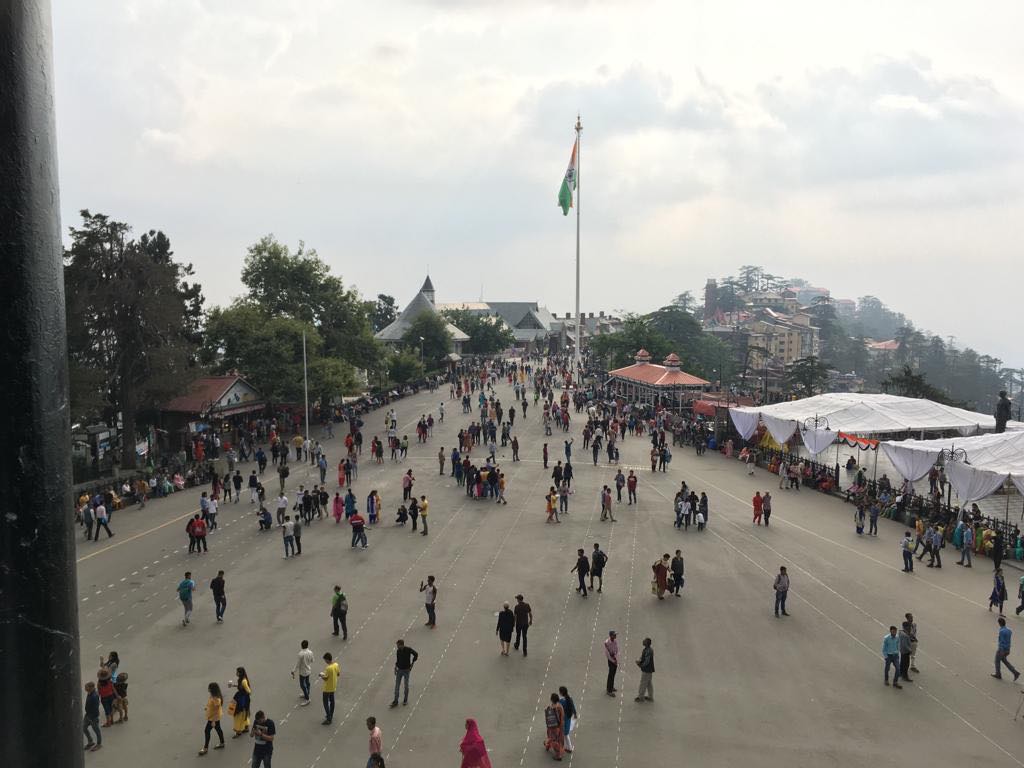 Before mountains and hills in the remotest corners of the country started calling a generation of Indians on a weekend basis, most of us from the north of country went to one of the three hill stations – Mussoorie, Nainital or Shimla -for vacations once or twice a year. Many of us would remember our young uncles and aunts “holidaying” at one of these places right after their wedding and if we were to flip through our parents’ collection of albums from the early days of their marriage, there we will find our mothers, in salwar kameez/sarees with long cardigans pulled over, smiling shyly at the camera in the background of a Mall Road or will stumble upon an occasional photo of our fathers’ hand resting piously over our mothers’ shoulder – ‘just husband and wife, thank you very much!’ What a fit that couple would’ve thrown at the thought of being clicked in their private moments, paying for the service and feeding the world with stories from their holiday while at the holiday!

When my husband and I picked Shimla for our holiday the past summer, we knew the hotel had to be on the Mall Road. I had long, leisurely walks bereft of an agenda on mind, ending either with a simmering cup of cappuccino or an ice-cream. When my mother got to know of our plans, I could feel the excitement in her voice. Even though they’ve spent most of their adult life in Delhi, the state of Himachal, of which Shimla is the capital, is where both my parents were born and raised, where I spent most of my summer vacations and the place they still think of as home. Inspired by nostalgia, I jestingly asked my mother (she hasn’t visited Shimla but has several relatives there) if she has advice on what we should do there. She offered her two cents (of which I decided to keep only one):

The Shimla Mall Road may not be facing a splendid lake as in Nainital or boast a collection of amazing Chinese restaurants as Mussoorie, but it has been the only one of all hill stations I have visited in India that retained its hustle and bustle right till 10-11pm. Staying at the Hotel Willow Banks, hosting the popular Cafe Simla Times, proved to be a wise decision as the cafe invites musicians and singers to play live every evening from 7pm onward. This bistro style cafe ticks all the boxes – a stunning view of the hills, warm and cosy ambience and good food.

A day into our stay and we had figured out a pattern – breakfast at a small shop neighbouring our hotel, selling lip-smacking ‘chole bhature’, Maggie noodles and ‘paranthas’, coffee at one of the local cafes, a stroll on the Mall Road and a couple of hours of sightseeing that led us to the aforementioned Jhaku Temple atop the hill and all local ‘touristy attractions’ our middle-aged cab driver deemed fit for us to see. These included taking a photograph with a mountain Yak (we refused), with a shrine (nay) and stopping by an amusement park that delivered juvenile thrills in the name of adventure (we had to find value for INR 1000). When we told him that we will stop by the Cafe Under the Tree, located in the temple premises, instead of waiting in line to enter the temple, he earnestly declared the cafe ‘not so good’ and that better food was available in the city for lesser prices. He couldn’t believe we were not doing the ‘darshan’ after climbing so many steps to the top. So far away from home, I wasn’t missing my parents one bit. The cafe, in fact, offered great views of forest and the valley as well as sumptuous food. If you fancy it, you can plan an adventurous trek to the temple starting at the Mall Road as an alternative to driving by car and stop by the cafe for refreshment at the end of the trek. Be sure to read the instructions on how to deal with monkeys at the beginning of the trek as there are quite a few you’ll meet on your way.

The languid walks on the Mall Road went just as planned while also leading us to several fascinating encounters – one with a gentle, elderly woman who thought the girl standing next to me in a cafe was my sister because our beautiful smiles (her words) had an uncanny similarity (they did) and one with the sagacious bakery owner of the Embassy Bakery who greeted us with immense kindness at his closing hour, indulged us in a long conversation about the city’s history and packed his ‘lamb biryani’ and special cakes for us because he wanted us to taste them. Our interaction with the owner of the little eatery where we had our breakfast everyday, albeit restricted to pleasantries, was mysteriously sincere and meaningful. We could tell he was happy to serve us and looked forward to our visit and we were thrilled to be eating freshly cooked food at his place every day.

The trip to Shimla remains one of the closest to my heart for it touched just the sentimental chord that I had been hoping for it to tap. It was rejuvenating to be seeing some semblance to the world that our parents grew up in, the one they desperately would escape to at a moment’s notice and the one that they are always trying to show us through the anecdotes from the past. This is the world where strangers can pay you unhesitating compliments, stretch their routine for a friendly conversation, carry an infectious simplicity that leaves you unarmed too and literally go the distance for you. Did I mention that the cab driver made arrangements to procure the wallet I had forgotten at the same cafe he was advising me against visiting? Shimla was not only a feel good trip that rekindled my belief in humanity and simplicity but it also made me realise that in search of new and unique travel gems, we have been forgetting that sometimes old is gold.