“I think the guy said we should go straight ahead from KFC”. Oh, see there is KFC on the left.”

“Yeah, I think this is the road, let’s just check on the GPS once, I’ll park for a while”

A show of hands from people who have travelled to Goa for a vacation, woken up in the morning (practically afternoon) with a bug bite on the face, have been unable to find a motorcycle to rent for almost two hours, boarded a couple of wrong buses in search of the nearest market, almost avoided a frustration-induced altercation with their partner before finally reaching a place where a motorcycle could be rented. All this on an empty stomach and on the day of your birthday! Don’t feel bad as yet; there’s more.

As soon as we found a bike that we could ride to the cafe we had in mind from our last visit, we breathed a sigh of relief. The worst was over and we were going to get some food. The husband, though, thought it’ll be wise to feed the bike some petrol first so that another unpleasant surprise could be avoided (little did the poor guy know!). So we asked around where the nearest petrol pump was. We were told that we should turn left from a certain KFC and go straight ahead. The excerpt above is our conversation while trying to find our way to the said KFC and the ‘bam’ is the sound of a car, hitting our rented motorcycle and breaking its tail light, pushing us a couple of steps in distance and miles in shock.

Before I even looked back, before I checked if my partner was alright, before I saw those four apologetic boys, before I could assume my worst candour (including pointing fingers and a shrilling voice that I am not proud of, just so you know), before we followed them back to the renting shop where they could pay for the damage they had done, my foremost thought was “This can’t be happening to me! It’s my birthday!” But it did happen, it was happening since morning, it was happening then, and it happened again! Aren’t you reminded of the climax of a Priyadarshan movie? For the uninitiated, a Priyadarshan comedy has enough drama in its climax to be declared unsuitable for those with a weak heart.

So when the GPS led us to the German Bakery that was closed for the season and was located far away from any other restaurant or cafe as against the one that we remembered to be in a bustling market, I was smiling the resigned smile that belongs only to madmen and unappreciated scientists. Desperate to make the day better for me and to eat, the husband decided that we stop by the next place that sells anything resembling food. Given the temperament of the day, I was prepared to get food-poisoning and was patting myself on the back for packing pain-killers. I realised the temperament of the day was actually to expect the unexpected when we stumbled upon a brilliant cafe at the first turn we took. It’s called the Artjuna cafe and sells incredibly tasty Artjuna toast that had us coming back to the cafe all three days of our stay. We also tried their pesto pasta, freshly-made and deliciously cooked.  Relief washed over and the coffee pumped back sweet life into us, and for the first time in the day we realised we were on a holiday.

As we sat there, discussing the events of the day, being able to laugh them off now that the food and caffeine had done their job, it registered that it was the first time we had ushered on a holiday without much research, were staying in a guesthouse during a vacation in India and that it was unprecedented that our place of stay wasn’t near a local market. Not that we hadn’t noticed this while planning our trip; just that the exact outcomes of these little changes hadn’t been staring us right in the face then. For a few hours that day, we had dealt with uncertainty, perhaps the kind that travellers encounter in their way quite often. Sure we were caught on the back-foot, and I’d like to avoid such situations in the future to the extent possible (strictly a holidaymaker and not a traveller) but I couldn’t help feeling a tad exhilarated and accomplished at having a tale to tell of my 28th birthday.  Hear hear future nephews and nieces; your aunt and uncle had their share of ‘adventures’!

By the time we left the cafe, it started to drizzle. We put on our rain jackets and looked at each other, and at that moment we both knew we had decided to unclench familiarity and comfort, even if for this one trip. As we rode away in search of THE German Bakery with light breeze and droplets of rain hitting our faces, the grass seemed literally greener, the rural landscapes of Goa more stunning and the day seemed to have exhausted its share of birthday surprises planned  for me for we had decided it could only go one way from here – better! 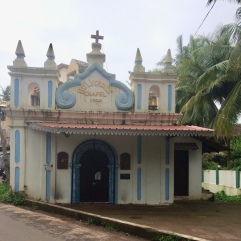 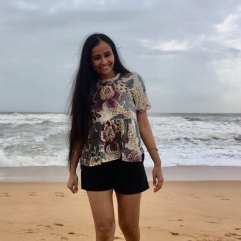