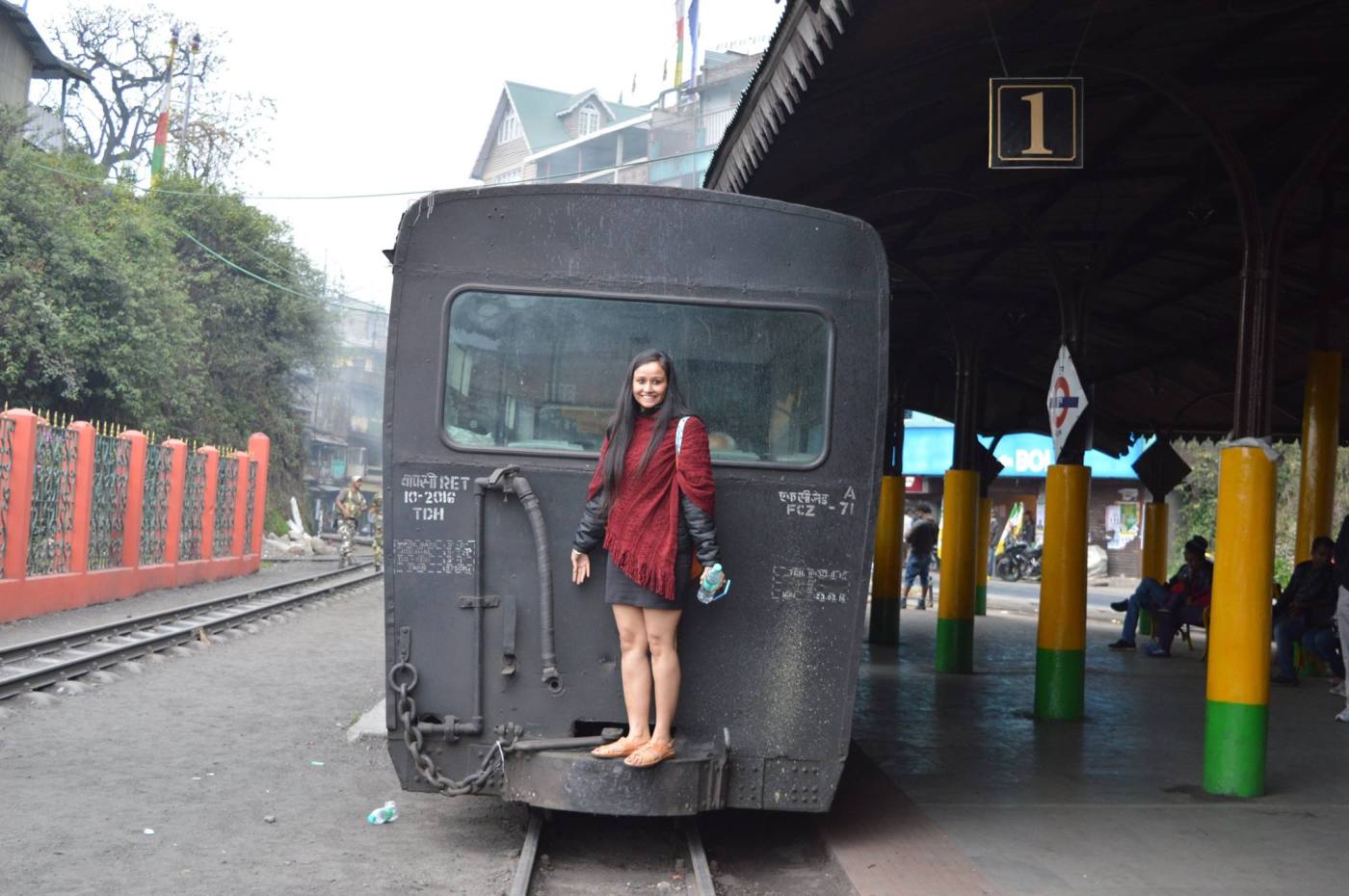 A ride on the Darjeeling toy train, the first hill passenger train of its kind in India, was on my wish list for a long time. So when I finally arrived in Darjeeling in April, 2016; I knew I wanted to ride the one that runs on the steam engine. For exactly the same experience, it cost me ₹ 500 more than the one run on diesel engine (priced ₹ 800), and getting aboard knowing the fact was my first mistake. For most part of my journey, I couldn’t see the engine, and inside it was like any other train, only more crammed – it’s called ‘toy train’ not just because it’s cute – which for me wasn’t a deal-breaker, but I did see a fatter man struggling to keep his ass on the seat.

Like most tourists, I chose the 2-hour long round trip on the Joyride Toy Train, covering a distance of 14kms from Darjeeling to Ghum, the highest point on the Darjeeling-Himalayan Railway. The toy train joyride begins at 7.40 am and the last trip from Darjeeling starts at 4.20pm. If you book yourself on this last ride, it’s already dark by the time you make the return journey to Darjeeling. You neither get to see the mountains in the distance, nor can you experience the hustle-bustle of the quaint Darjeeling that the toy train promises to deliver. All you see are the silhouettes of landscapes under the setting sun, and then later in the moonlight, which isn’t as romantic as it reads. After a while, it gets boring and you start wishing you’d reach Darjeeling sooner. So, booking this last ride became the second mistake, one that I would later regret.

The toy train moves leisurely to either corner of the road; first through the city and later on the zigzag trails in the mountains. When in the city, you can almost touch the muddy bottom of the slope, populated by bushes and weeds, atop which rest the houses of the locals. Except, you wouldn’t want to because you’ll be repulsed by the amount of garbage that has been thrown down by the residents, all accumulated over the years. From pizza boxes to plastic bottles, and from sanitary napkins to things I would leave for you to imagine; there will be an assault on more than one of your senses. And, if by an ill fate you get the seats on the left side while the train leaves Darjeeling, you’ll find yourself on a tour which can only be titled ‘the garbage of India and their types’. For me, the horrific sight was brutal reminder of how irresponsible we are toward sanitation and cleanliness in India. If that was the condition at a UNESCO World Heritage Site, you can imagine how misplaced our priorities must be as a nation that promotes tourism. Tourists aren’t to be excused of the blame either. I myself saw fellow travellers emptying their hands and bags of cold drink bottles and wrappers, and adding a heap of their own to the piles of garbage.

The 10-minute stopover at the Batasia Loop, a perfectly manicured garden with a soldier memorial and an Eco Garden, and the views of the Kanchenjunga Mountain and the Darjeeling city from there was a pleasant respite. I could feel my irritation melting away after laying eyes on beautiful flowers and lush grass of the airy garden that has been named well (Batasia means airy space). I would, however, recommend a separate visit to the Batasia Loop for two reasons. One, you will have to rush back to the train before you would’ve enjoyed the views to your satisfaction. Secondly, there is a small market nearby where you can collect souvenirs and stop for a snack if you have the luxury of time, which we didn’t have.

The Ghum station is a smaller version of the Darjeeling station, and you don’t really feel that you are the highest point of the Darjeeling-Himalayan Railway. I was expecting to see vistas of mountains and trees and was quite disappointed to find out that the major attraction there was a museum. I didn’t visit the museum and utilised the time to see around. I gorged on ‘samosas’ and was quite happy to see those glass jars containing what we called ‘buddhi ka baal’ (an old-woman’s hair) in our childhood. Somehow, those aren’t as readily available now, or maybe I won’t find them in the malls that I frequent now.

I won’t mention the journey back to Darjeeling as it was quite uneventful. Only, that with no views because of the darkness, the same left-side seats as the train doesn’t turn back at Ghum, only the engine changes direction; and the increased chill in the air; I was pretty much done for the day.